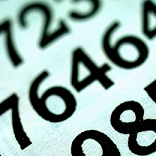 When do you spell out numbers or write them as figures? It's a tough call. Simply put, the basic rules for expressing numbers would not be such a game if writers would agree to express numbers entirely in figures or entirely in words.

Figure Style is most commonly used in ordinary business correspondence (dealing with sales, production, finance, advertising, and general commercial matters). It is also used in journalistic and technical material and in academic work of a technical or statistical nature for emphasis and quick comprehension.

General rules for Figure Style are:

Examples:
I would like ten copies of your new book.
I received 65 requests for your article that was in the paper.

2. Use all figures even for the numbers 1 through 10 when they have technical significance or need to stand out for quick comprehension of tables, statistical material, and expressions of dates.

3. Use words for numbers at the beginning of a sentence for most ordinals, fractions, and non-emphatic references.

Examples:
Our twenty-fifth anniversary was yesterday.
Twenty years ago we traveled to Spain.

The Word Style of numbers is used mainly in high-level executive correspondence and in nontechnical material, where the writing is of a more formal or literary nature.

General rules for Word Style are:

1. Spell out all numbers whether exact or approximate that can be expressed in one or two words.

Examples:
Mr. Grove received forty-three letters in the mail about his ad.
More than two hundred people entered the race.

2. Express related numbers in the same way, even though some are above 100 and some below.

Example:
She sent out four hundred invitations for her wedding, and she has already received one hundred acceptances.

Here's another wrench to throw in. In a number of cases where either figures or words are acceptable, your choice would depend on whether you are striving for emphasis or formality.

Bottom line, use these 2 two definitions of Figure Style and Word Style to meet your writing needs.

>>
To get started, click on EDIT NOW. Simply select your delivery time and enter the required information. Most importantly, attach and upload your document to be proofread / edited.
02

After submitting the required information, pay using any major credit card. PaperEditNow.com utilizes Paypal to ensure transactions are guaranteed to be secure and safe.
03

>>
PaperEditNow.com does the rest! You will receive your edited document, in both smooth and edited form, in your selected turnaround time or less via email. It's that easy! Start today!